A young woman has told a rather stunning story of how a pastor deceived her into having intimate sexual affair with her.

Five times Toyin Abraham and her husband melted our hearts…

Fundiswa Lekhula
The young lady identified as Fundiswa Lekhula from Ipopeng kasi in Mangaung in South Africa told of how a pastor got her pregnant.
According to Daily Sun SA, the 21-year-old Funsiwa who is right now five weeks pregnant claims the 50-year-old pastor, Attie Kgware tricked her in love.
According to her, pastor Attie Kgware, promised to marry her and buy her a new car. She claims he insisted on unprotected s*x.
Speaking with DailySun, Fundiswa said: “He told me his sperm was holy and would bring positive results to my life.
“I was a member of Your Choice Christian Ministries church and in January the pastor started telling me my boyfriend was bewitching me. I got confused and he took advantage of me because I trusted him as a man of God.”
She claimed he told her mother he wanted to marry her.
“We started dating and he promised me a new car – before, during and after we had s*x.”
She claimed she was studying industrial psychology but Attie made her stop.
“He said he would sell his bakkie to settle my university fees. He wanted to leave Bloemfontein and go to Tlokwe, where he wanted me to enrol in a nursing course,” Fundiswa said.
“Now I am pregnant and he doesn’t want anything to do with me.”
Another pastor, Vusi Masiya, who is a car salesman, said Attie told him he wanted to buy a car for Fundiswa.
“I asked him what was happening between him and the young woman and he did not answer me. I know that he is a married man and that makes me ashamed to be a pastor,” said Vusi.
Attie’s wife, Bogolo (47) said Fundiswa was just the church secretary and had never been in a relationship with her husband.
Attie told Daily Sun: “If she is pregnant, why does she go to the media? She should contact her uncles and they must write a letter to the elders. She is angry that I did not sell my bakkie. I have never slept with her.”
Fundiswa’s mum (40) claimed: “Attie said his marriage was sour and he wanted to marry my daughter.”
Daily Sun reports they are in possession of many text messages allegedly exchanged between the pastor and Fundiswa. 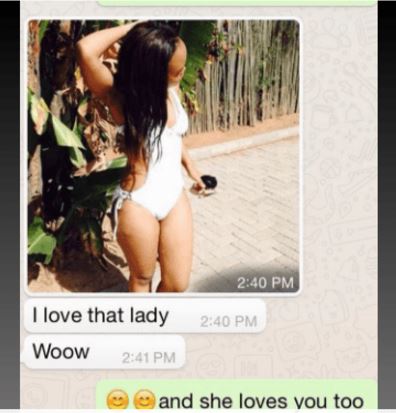 In one message, Fundiswa asked the pastor if he stalked all the members of his congregation and he replied: “Only you.”
Under a picture of her in a swimsuit, he wrote: “I love that lady.” She replied that she loved him too.
One message from the pastor read: “For me you are the best. Thank you and may God bless YOU MORE.”
Daily Sun reports they spoke to the pastor on the same cellphone number used to send the text messages.
0
Share FacebookTwitterWhatsAppReddItTelegramEmailPinterest

Unbelievable! What this Lady Was Caught Wearing in a Public Place Will Shock You (Photo)

Kemi Olunloyo drags Davido, says he lied about the multimillion mansion he bought in…