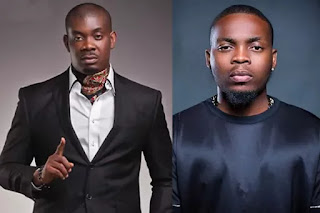 Photos: The Top 10 Nigerian Celebrities Who Were Born Rich…

2016 kicked off with YBNL CEO, Olamide and Mavin’s boss, Don Jazzy throwing shots at each other on the first day of January. The once upon a time good friends wished a happy new year with a beef at the Headies Award show which held at Eko hotel.

The beef was as a result of the award for the next rated category between Marvin’s Reekado Banks and YBNL’s Lil Kesh which was awarded to Reekado. Olamide who did not agree with this took to the stage to shade the award and Don Jazzy called him out in his response on the same stage. Later that night the fight was moved to their social media pages. The feud was ended by Dangote.

READ ALSO: »  I have not abandoned my ambition to become President in 2019 - Ayo Fayose

Nollywood Mourns: Checkout The Top Nollywood Actors Who Died Within A Month (With…

6 Nollywood Actresses Who Abandoned Christianity for Islam With Pictures